It all began when we started renting an apartment in August of 2020 and looking for our first home. Our criteria were necessity based for the most part. The home had to cost $120,000 or less, as that was the ceiling on our mortgage pre-approval. It had to have at least two bedrooms, and a garage for all our tools and car maintenance. We agreed that a place that needed touch-ups or aesthetic help was doable for us, but we were absolutely not ready for a fixer upper. Not for our first home, and not with an almost-one-year-old and me being almost 5 months pregnant. Truth be told, I was secretly hoping for something that was completely move in ready. 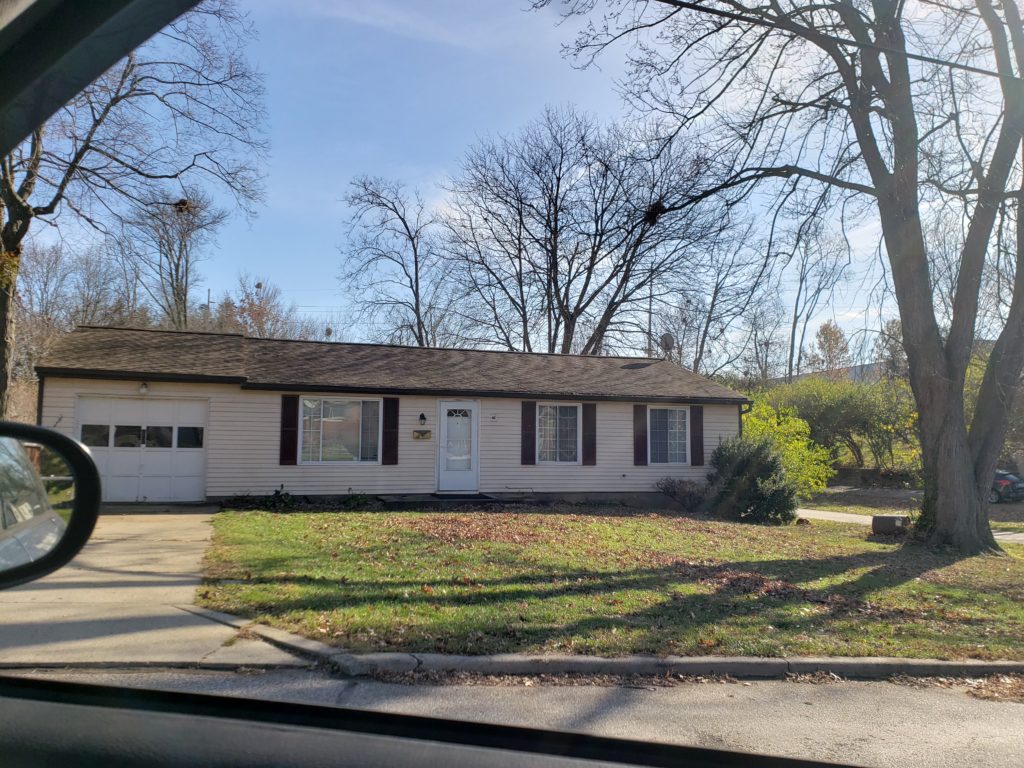 We spent time searching for houses we’d like to view and our realtor set up the appointments. In one day we were going to see 4 properties. It was supposed to be 5 but we ran out of time. So as we stood in the 3rd property (the third that we knew we wouldn’t make an offer on) we had to decide which of the last two properties to go see and which to reschedule. One was listed just above our price range and was still occupied. One was in our price range and unoccupied. The more expensive house was one I had put on our list so we could get an idea of what was the “best thing we could get for our money” and then set our expectations just a little lower so we wouldn’t be too disappointed. My husband didn’t even want to look at it because it was out of our price range, but I convinced him our expectations needed a tangible cap. We only chose that property to go see that night because it was significantly closer to us and would be harder to reschedule the showing since it was occupied.

The house was occupied, but by tenants, who kept the place in abysmal condition. It turned out the owner had died and left the place to his ex wife who had listed it two days prior to our showing because she didn’t want anything to do with the place. I walked out of the showing in a certain level of disgust and assumed my husband felt the same way. So I was surprised when we stood in the driveway and he said, “lets make them an offer.”

Why? Because it was what we were looking for. A three bedroom, one and a half bath, with a garage, on almost a quarter acre with a shorter work commute, and it was 40 years old instead of 100. And if the lady wanted to ditch it so badly, she would take a lower offer.

I couldn’t really argue with all that.

It was hard to tell what condition the house was really in because the tenants were absolute slobs and pack rats, but we figured that just meant it would need some serious deep cleaning. 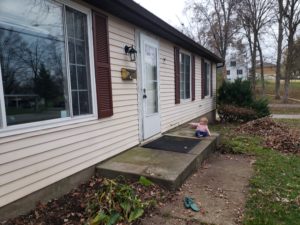 So we put the offer in and it was accepted. We jumped the hoops, got the place as inspected as we could with the tenants still in it, and negotiated the price even lower than our original offer because the owner would do no repairs. And then in mid November we closed on our first home. The tenants moved out the day before and the place was ours.

And let me tell you. Our original criteria had all been met except for one significant piece. This place is a fixer upper! Let me just list a few things that were glaringly obvious when we got the keys. 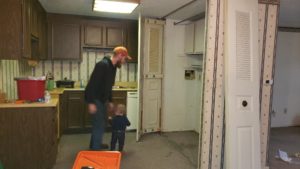 That’s what we discovered day one. (Did I say a “few” things? Sorry!) Later we also came across further issues, like that all the drywall nails in the house are popping out and leave little rows of bubbles in the walls – everywhere. And that the ceiling drywall was hung low instead of against the joists to make up for the walls having too short of drywall installed, so the taped corners and edges are all useless. The furnace also gave out completely after less than a month. And half the electrical sockets in the house are wired wrong, aside from being placed at wildly different heights even within the same room. There are also exposed live wires from a missing vent hood, and light switches that go nowhere. The water main valve was also rusted out and about to give way.

You may ask how we didn’t notice these things or how they didn’t come up in the inspection. Just believe me when I say they were all inaccessible due to the vast quantities of junk the tenants had. Or the inspection came back that something could go out in the next five years and it gave out right away, like the furnace.

So, at least according to two people who have never owned a house or done more than very minor home fixes, this place is absolutely a fixer upper. And it became our goal to fix it up ourselves, because that’s the kind of budget we’re on. And the goal was that even though we had to move in by the end of November (our lease was up) that we would quickly have the house deep cleaned and overall livable, walls painted, carpets pulled, and new flooring. And we needed it done before January, because I was about to have a home birth and I was due January 3rd. But that itself is a story for another time.

So this is the before story because so far there is no after. It is March and we are very much still in the trenches. We have made many improvements over countless hours of trial and error, countless trips to Home Depot, and countless dollars spent (at least compared to what we anticipated!)

Here’s a little gallery of more of our before pictures. Hopefully you’re horrified enough to wonder how we are surviving (I wonder all the time!) and you’ll keep checking back to see how we are faring, because I’ll be here letting you know how it goes!

(Click on the gallery to open it up so you can scroll through more easily!)

We live with our three young girls in Kentucky and are pursuing a life of self-sufficiency, simplicity, and intentionality. We're doing this by self-educating in a sea of lost skills and dying trades. We are currently renovating our first home (the debt-free DIY way) and teaching ourselves new skills and life lessons on a constant basis. We're blogging to help those who want to live a similar lifestyle learn the same things we're attempting, here and on other social platforms. (More about us.) We're so glad you've stopped by!