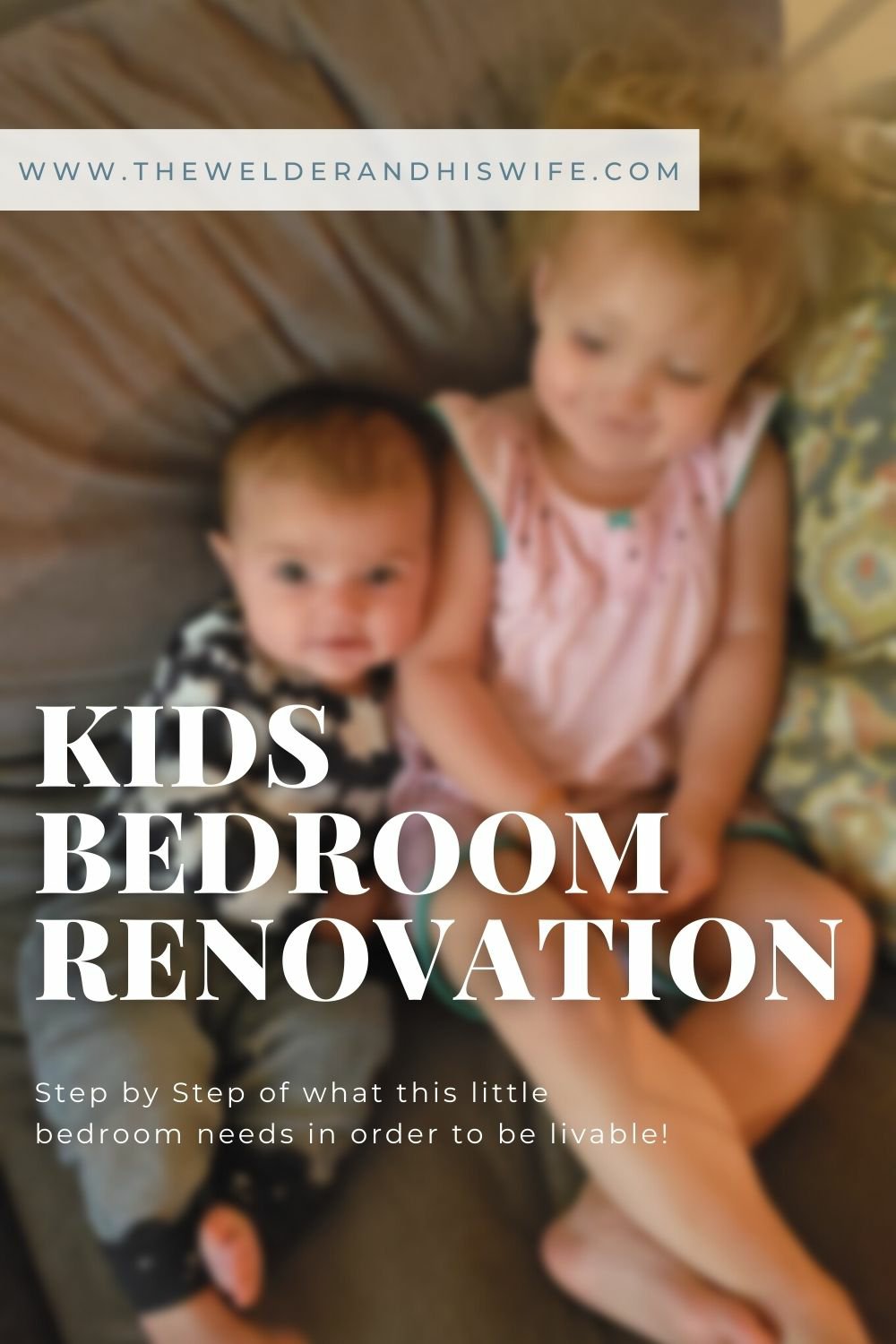 Why is the kids’ bedroom renovation important? Well. As parents taking on a DIY renovation of a whole house, sleep may be the most important element that holds everyone’s sanity together. Especially with a toddler and a newborn, the amount of daytime juggling is a very real factor in the overall success of even the most mundane project. But from the start this house was barely livable, so it should come as no surprise that at almost six months in, we still only have one bedroom in decent condition for living in.

That means that all four of us have been packed like sardines into our tiny bedroom, awaiting the kids’ bedroom renovation that will hopefully be a game changer. We are still in preliminary steps as you will discover, but things are beginning to come together and the priority level is rising!

Our fixer upper has three bedrooms, and none of them are what I would call large, or large enough to have a real “master bedroom.” However, we did set up camp in the least-small room and called it ours. For now the “kids’ bedroom” is the middle sized room, and the smallest room which is little more than a large closet (really, my sister’s last house had a walk in closet the size of this bedroom!) will serve as an “office” and storage room. Eventually when we have more kids the smallest room will regain its bedroom status, at least temporarily.

However, during the course of moving and renovating, both bedrooms became “staging” rooms for massive stacks of boxes we were not ready to unpack, items which haven’t found homes yet, and things shuffled away so as to avoid being covered in drywall dust. Both rooms are utter chaos and handling this phase of the project will be a feat of its own.

I have begun to use the girls’ closet to hang their clothing, and they each have a small Tupperware dresser in the bedroom, so one tiny corner of the room looks like little girls may one day inhabit it.

I also have my sewing machine and sewing boxes opened up in a less cluttered corner of the room, as I had a huge project on a tight deadline, and no other place to go. That part can be packed back up for the time being.

Last week I began to consolidate partial boxes and unpack items in the other smallest bedroom with the intent of being able to do the same in the girls’ bedroom and then move all of the remaining full and partial boxes into the smallest bedroom “office”. My goal right now is not complete perfection of each step, but simply the ability to move on to the more essential processes. So as of this moment, the smallest bedroom got half way cleared out, and the girls’ bedroom got maybe a quarter cleared out, and I can begin to shuffle things from their room into the smallest room. I just worry it won’t all fit and then I’ll be stumped again.

What does a kids’ bedroom renovation need? So much. So, so much. Once the room is cleared of all its contents, we need to do a drywall repair on about a two foot square of the ceiling where water or moisture has warped the drywall from a vent leak in the attic. This part will be Jefferson’s task. He will probably also be the one to rip out the disgusting carpet and tack strips, because he has big biceps and I have tiny ones.

Those two things alone will take at least a day, but they will be monumental in preparing the “canvas” of the girls’ bedroom.

While he works on the ceiling, I will tackle a smaller (maybe 5 inch square) drywall patch for a hole in the wall, as well as filling in a couple dozen nail holes and other scuffs and damage on the walls, and sand them down after they dry. We’ll remove the floor trip along with the carpet to paint and return after the new flooring is down. Socket covers and light switch plates will come off and be thrown away (they’re so disgusting guys!) and then after a final wipe down of the walls (to remove any drywall dust, among other things) we will be ready to prime and paint.

Once this is accomplished, we will probably move the girls’ things in and have them begin to occupy the room before we complete flooring. Since we are doing the same flooring throughout the whole house, we have to be prudent about when we begin that task so that it doesn’t take too many separate days, and so that it isn’t left partially done and able to be “pulled apart” before we make it to a different room. So area rugs are going to be our friends at least briefly.

The room is getting new electrical plates, new curtains installed instead of the blinds, a closet door refresh, paint, flooring, and ultimately furniture and babies. I have a toddler bed that I found for free that I need to do a little makeover on and get new hardware before it can be set up. I can’t wait!

The timing for this kids’ bedroom makeover has changed several times. Really, we wanted it to be one of the first things we did in this house, but things keep coming up or being found that have much more urgency. However, we are quickly approaching a point where “getting the kids out of here” is of the highest urgency. It was initially going to be just our toddler moving into the room while the newborn stayed in our room for a few months, but those months have come and gone, and now we are thinking we will move both babies into the room at the same time. We are hoping that it will ease the adjustment somewhat for our toddler to know she isn’t alone in there.

So my goal timeline is this –

·         the ceiling drywall and the carpet situation will have to be on a weekend, so if I’m lucky/industrious the rest of this week then maybe we can pull that off on Friday. Otherwise it has to wait until next week.

·         the spackling and wall patches can happen at any time once those things are accessible and boxes don’t block the way, so maybe I can do that even before the ceiling and carpet, but let’s just say a week before that’s done.

·         priming and painting may take a whole weekend depending on how many coats it needs and how long they take to dry. I’m hoping that can be the weekend after next rather than the one after that.

·         in the mean time we can make our DIY curtain rods and pick up whichever wall plates we need for the electrical.

So I guess a very conservative timeline says we need 2 weeks, and a more realistic timeline says we’ll be done in 3-4 weeks. Keeping in mind of course that my husband works 10 hour shifts and can very rarely do significant amounts of renovation work in the evenings without it disrupting the kids’ bedtime routines or his own limited sleep schedule. So weekends are our only friends in this business. If we had several straight days to work on it consecutively, the whole thing could be done to satisfaction in under a week.

So there you have it – the ins and outs of what we need to do to make this kids’ bedroom renovation a reality, so that hopefully we can all start to get some better sleep (and quality alone time, right?)

We’ll be back to writing and keep on updating about the process, what products and materials we use to accomplish the task, and what we learn along the way. Thanks for reading!