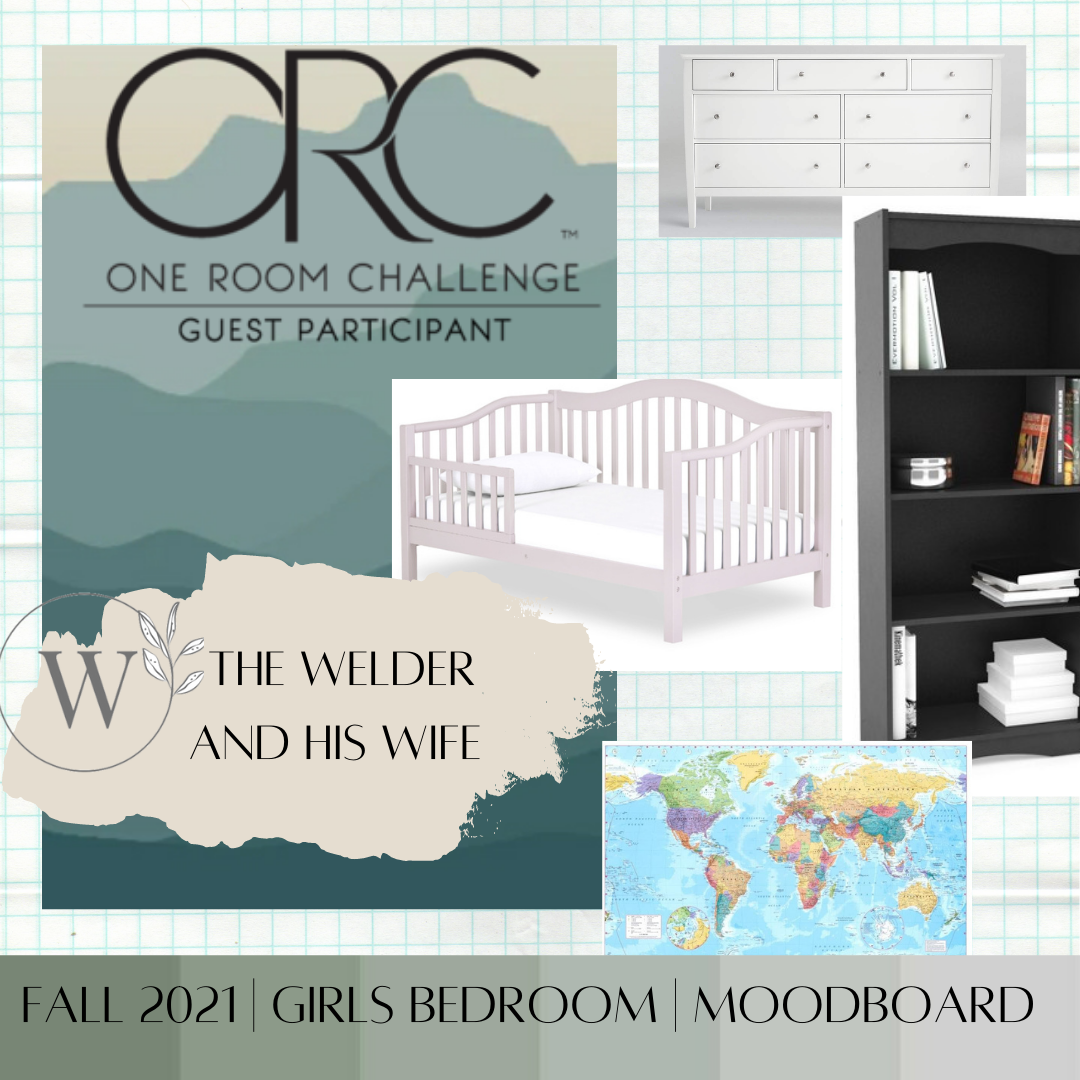 Welcome! Today is the beginning of the Fall 2021 One Room Challenge, at least for guest participants!

I only learned about the One Room Challenge about a year ago when we were looking at buying our first home, and I knew we were going to have a lot of “fixing” to do in any house we could afford. Little did I know that just a couple months later we would close on an absolute no-two-ways-about-it fixer upper!

When we started renovating I really wanted to document all that we were changing in our home, and my husband encouraged me to start a blog rather than just post the occasional picture to Instagram. So The Welder and His Wife was born. And it was still many more months in before it dawned on me that we could be “those people” who share their creativity, design, and skills through the One Room Challenge.

What is the ORC?

If you’ve never heard of the One Room Challenge (ORC) it is usually a 6 week challenge, but expanded to 8 weeks due to Covid slowing things down. In those 8 weeks, 20 Featured Designers and countless Guest Participants design a space and execute its completion. That doesn’t necessarily sound too impressive until you take a look at what that encompasses. I still have trouble conceptualizing the scope of some of these projects.

(One of this year’s featured designers is designing an entire youth shelter that will include seven bedrooms as well as living spaces. I won’t tell you which, so you’ll have to go check out each designer’s intro post, but… holy cow, right??)

What is our project? Girls Bedroom Reno!

Our project for this One Room Challenge will not be nearly as exciting in comparison, at least not to anyone who doesn’t live in our home. I’ll tell you why it is exciting to us though!

When I say we bought a fixer upper I mean that if 0 is a house that is move in ready and 10 is a house that is completely gutted (or needs to be) then our house is somewhere around an 8. We bought the house in November. In January we had our second child, at home, in a scheduled, planned, deliberate home birth. Since then, all four of us have been living in the one bedroom we “fixed up” prior to her birth. When I say we fixed it up I mean we removed the carpets down to the concrete slab, painted the walls, and put a new closet shelf and rod in.

So, the girls need a bedroom. Badly. Our oldest just turned 2 years old in September, and the baby is now a whopping 8 months old – time flies when you have a fixer upper and only weekends to work on it, I’ll tell ya that much!

So our project this time around is taking a room from unlivable to safe comfy cozy girls’ bedroom.

Here are some photos from when we first moved into the house. It doesn’t look so bad, does it? I wish I had take much more detailed photos! But I’ll take more for the next post. Well anyway, I was deathly allergic to the house when we moved in. Everything from cigarette residue, cat and dog urine, feces, and vomit, and countless other unknown substances were deeply ingrained in carpets, walls, ceilings, vents, air filters, everything.

This room became a “staging area” for boxes that were moved in with no place to be unpacked yet. Somehow, half of those boxes are still there, 10 months later. Does that officially mean we don’t need what is inside of them? Perhaps. I’m definitely leaning toward that possibility!

What is the goal?

The goal is simple – the girls need to be able to move into the room and be safe and healthy. It isn’t going to be a state of the art, designer’s dream nursery. It’s going to be very kid friendly, practical, and realistic, use mostly second hand furniture, and stick to as small of a budget as humanly possible.

Well, we’re Dave Ramsey people, and we don’t believe in going into debt unnecessarily. That’s the short answer. We are also passionate about learning the skills to DIY basically every single thing in life, and trying to live sustainably and without wasting things that are perfectly good and have a lot of life left in them.

So that’s the plan. Rip up carpets, fix a ton of drywall in the ceiling and walls, replace the ceiling fan, paint, add curtains, and upcycle a bunch of Goodwill furniture. And if we get to it? A wall mural.

What do you think?

Will you come along for the ride? This is my first time doing anything like this, and I couldn’t be more excited – both for the skills I’m going to practice and learn, and for my girls to move out of my bedroom for goodness sake!

Our blog here is participating in the ORC and will be our official weekly submission, but check out our Instagram page to follow along with the actual process! Mini reveals in posts, daily progress in stories, and I’m sure you’ll get to see the two little ones underfoot along the way as well. Come give us a follow!

If you’re interested in subscribing to just these ORC posts, put your email into the form below and you’ll get just the updates posted weekly for the next 8 weeks for the Fall 2021 ORC and then you won’t be hearing from us again, unless you want to!

And be sure to check out all the other Guest Participants and Featured Designers on the official One Room Challenge website!

Thanks for stopping by!