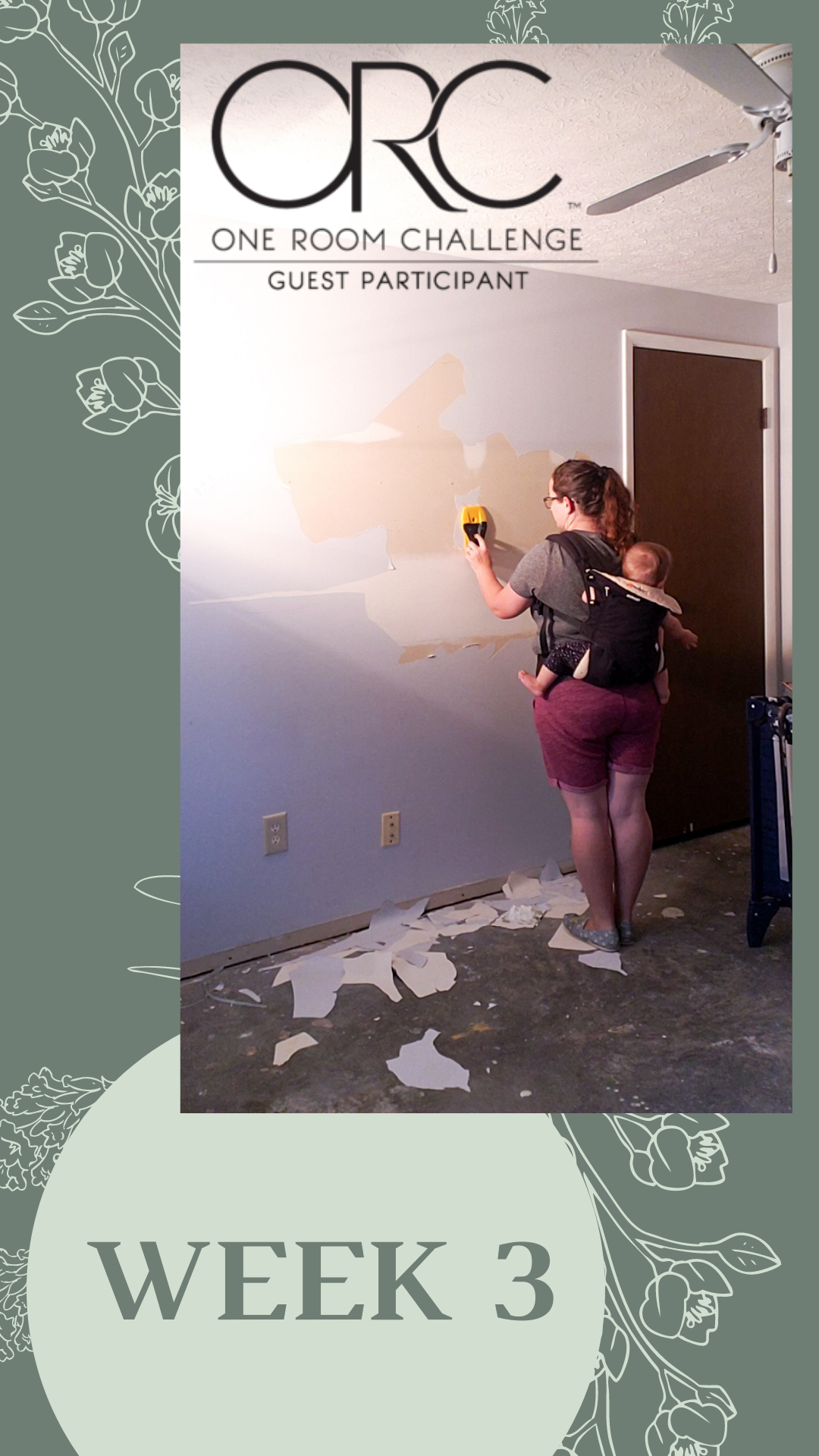 I managed to be a lot more productive in the girls bedroom this week than I was last week. And it looks worse. Much worse. But that’s what they say, right? It’s gonna get worse before it gets better.

This week I did almost all of the work in the bedroom with a baby strapped to my back. She didn’t really help, but she was a heck of a lot happier up there than trying to follow me around between all my tasks. And we quickly got to a point where it simply isn’t safe to let her crawl around in the floor in there.

This week I have pulled a ton of nails, screws, and hooks out of walls and ceilings. I went through and pulled the curtain rod mounts and the hardware for the blinds off of the wall, and I’ve spackled every last hole in the room. The large patch that I did last week needed another coat of drywall mud to feather it out and make it invisible once we paint.

Removing the baseboards took me about half an hour. Maybe a little longer if you count the time to clean up a small cut on my knee from the prybar slipping. Don’t worry, I’m fine.

I am really, really hoping that we decide not to reuse the baseboards and just to put in new ones. These are damaged, but even worse they are just disgusting, even after being cleaned. The staining is just… bad. Don’t get me wrong – if we reuse them they will have all their holes filled and be primed and painted, so they’ll look as close to new as possible, but, I don’t wanna.

Removing the carpet and underlayment took me about an hour. I’ve never removed wall to wall carpeting and this carpet is easily the worst, most disgusting part of this house. Unless you count the bio-hazardous material that has seeped through said carpets and into the concrete subfloor. I didn’t even know that concrete was porous enough to absorb things, but I’ve definitely learned otherwise! I had to use gloves and a full blown respirator in order to safely take all the carpet out, as I am very allergic to it, as well as the nitty gritty dust, dirt, and other things found underneath.

The trash truck took away the carpet and tack strips earlier this week, and I say good riddance! I then cleaned the concrete slab with Kids ‘n’ Pets, which is an enzymatic cleaner that essentially “eats” away biomatter that causes odors and stains. Where there were big black patches on the floor from some unknown pee, poo, or vomit of the previous owner’s dog or cat, there are now large white patches with a texture like lichens on a rock. It is very odd, but presumably just how the enzymes work. Now it just has to be mopped over.

This next week is going to see even more demo and repair before we are ready to begin fun things, like painting. I cannot believe I just called painting “fun” but compared to the things we’ve already accomplished, that will definitely be a highlight of fixing up this bedroom.

This coming week I really hope that my husband can help me with the ceiling and the walls. The ceiling needs a large (several feet square) patch in a place that got water damage from a roof leak under previous ownership. My husband will do this because I’m so inexperienced with drywall, especially on that scale, and this is a portion that is crucial to get correct. I’ll definitely be there to watch and learn, but this part is for him.

He will also be taking the snowflake texture off of the ceiling by scraping it down a little bit to remove the highest peaks, and then filling it in with a skim coat of drywall compound to fill in the valleys. With a quick sand in between, he anticipates this taking 2 coats. We’re doing it to the rest of the house too, so this will just be the first full room we do that in.

I’ll be removing the ceiling fan and probably replacing it. We have another “new” one we got on Facebook Market Place, that we’ve been planning to put in here, but it is black and the current one is white, so with a clean up and new glass for the light fixture, the current one may be preferable for the space. We’ll just have to see!

Do you ever take on a super “extra” project because there just wasn’t enough work to do already? I don’t mean like, “oooh let’s make it a shiplap wall!” or, “do you think crown moulding would improve the space?” kinda extra. I mean work-work, that prolongs this “demo and construction” side of the project.

In most rooms of our house, the drywall nails (yes, nails) have popped and can be seen as little bumps and holes in rows down each wall. Not every single wall or every single nail, but pretty stinkin close.

In our living room my husband went through, used heavy duty drywall screws to secure the drywall to the studs, and then pulled out every single drywall nail in the room. What?? Yes! Do you know how many holes were in my living room? Too many to count – that’s how many! Of course he filled in each of the holes and we’ve primed and painted since, but holy moly. Talk about going the extra mile!

So, he wants me to do that in the girls’ bedroom as well, making the point that eventually every other room will get the same process done, and that I’ll be unhappy in the future if I skip it on this room. Ughhhh. Fine.

So, there’s a few more hours of work right there, which in SAHM-with-a-baby-on-her-back language translates to 2-3 days of additional labor. Fun.

Are we there yet?

I’m still optimistic that by next week I will be able to start priming and painting. I think that compared to the sort of work I’ve been doing and have in the next couple of days, painting is going to go much more quickly. It’s something I’ve done before and something that goes in much smoother chunks. I’ll probably set up the play pen in there while I do it so I don’t have to wear the baby the whole time, and hopefully it goes quickly that way. I can’t wait for this girls bedroom demolition to be behind me!

Once priming and painting are done, I get to flip some furniture and begin all the fun design elements of creating this girls bedroom. And let me tell you – I cannot wait!!!

As always, thank you for being here. Use the form below if you’d like to follow along as we post new updates on this 8 week ORC project. Use the links below to check out posts by my compatriots on the ORC blog, as well as to jump over to @thewelderandhiswife on Instagram, where you can join in the fun in real time! 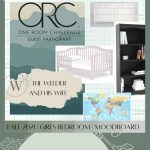 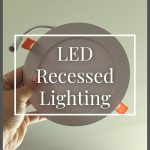